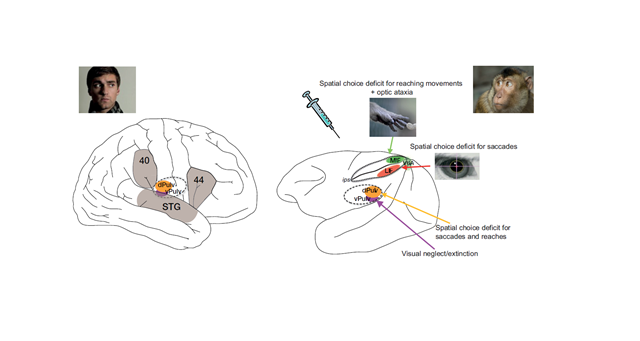 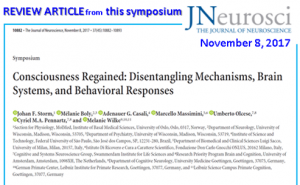 Figure 1.
Examples of bistable stimuli. A, In binocular rivalry, two stimuli are shown to different eyes and perception wavers between left and right eye stimuli (Blake and Logothetis, 2002). B, Ambiguous structure-from-motion (SfM) stimulus. Dots moving back and forth on a flat screen, without perspective cues to differentiate between front and rear surfaces, induce the perception of a 3D rotating object that periodically switches direction. (Sterzer et al., 2009) C, Generalized flash suppression. A target stimulus (red dot) is shown parafoveally followed by the onset of a moving surround, causing the red target to disappear in ∼50% of trials (Wilke et al., 2003).

Experimental outline for the no-report paradigm for NCC studies. A, Depiction of the problem. We aim for the correlation between a conscious content and a given brain state. What is measured experimentally is the correlation between a behavioral report and a measure of brain activity, which might be appropriate or not. Report-related neural activity poses a confound for the NCC. B, Involuntary physiological measures taken to infer the perceptual state of a subject to circumvent the behavioral report (Tononi et al., 1998; Leopold et al., 2003; Laeng and Endestad, 2012; Tsuchiya et al., 2015). 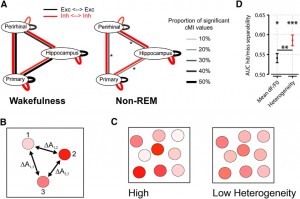 Figure 4.
A, Summary of main findings on spike-based functional connectivity in rats (Olcese et al., 2016). Coupling was measured as pairwise cMI between single neurons. During wakefulness, cMI between neurons located in the same or different areas is largely balanced (left) for both excitatory and inhibitory neurons (black and red lines, respectively). In NREM sleep, interareal (but not intra-area) coupling between excitatory neurons is significantly reduced. This did not apply to intra-area cMI and interareal cMI (between interneurons). Line thickness indicates the proportion of neuronal pairs for which cMI was significantly >0. Asterisks indicate which connections showed a significant change between wakefulness and NREM sleep (the only significant differences found pertained to interareal coupling between excitatory neurons). Thus, during NREM sleep, neural computations may continue in local “islands of activity,” whereas global integration capabilities are reduced. B, Calculation of heterogeneity across a neuronal population (compare Montijn et al., 2015). A measure of a neuronal activity change (A, e.g., the relative fluorescence response of a neuron in 2-photon imaging, dF/F0) is computed across all neurons. Next, the responses are z-scored per neuron across all trials and all trial types (e.g., in a given session, visual stimuli are presented at 6 different contrasts; each contrast is presented 20 times; 120 trials in total). Per trial, the absolute difference in z-scored activity is then calculated across all pairs of neurons (e.g., ΔA1,2 is the difference between the responses of neurons 1 and 2). The population heterogeneity in a given trial is the mean of activity differences across all pairs. C, Examples of high (left) versus low heterogeneity (right) in a neuronal population, where response strength is indicated by color saturation. D, In a visual stimulus detection task performed by mice that were subjected to 2-photon imaging of V1 neuronal populations, heterogeneity was better capable of separating hit (detection) and miss (nondetection) trials than the mean fluorescence response (area under the curve resulting from receiver-operating characteristic analysis). Both measures predicted response behavior above chance: mean response, *p < 0.05; heterogeneity, ***p < 0.001; area under the curve = 0.5, chance level. Behavior was predicted better by heterogeneity than mean response (**p < 0.01). Values are mean ± SEM across animals. Data from Montijn et al. (2015).