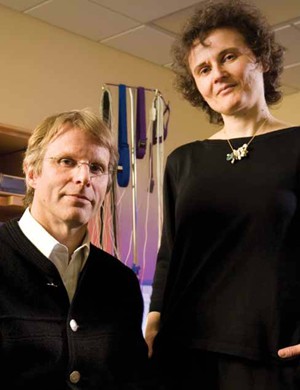 Giulio Tononi is a psychiatrist and neuroscientist (MD, PhD). He is currently Professor of Psychiatry at the University of Wisconsin, David P. White Chair in Sleep Medicine and is a Distinguished Chair in Consciousness Science. He has previously held faculty positions in Pisa, New York, San Diego.

Chiara Cirelli (MD, PhD, Pisa, Italy) is currently Professor of Psychiatry at the University of Wisconsin, Madison, where she moved in 2001. In 1994-2000 she was Fellow of The Neurosciences Institute in San Diego, California.

The research in Dr. Cirelli’s laboratory aims at understanding the function of sleep and clarifying the functional consequences of sleep loss. Her team uses a combination of different approaches, from genetics in fruit flies to whole-genome expression profiling in invertebrates and mammals, to behavioral and EEG analysis in mice and rats.

The research of Tononi and Cirelli include genomics, proteomics, fruit fly models, rodent models employing multiunit / local field potential recordings in behaving animals, in vivo voltammetry and microscopy, high-density EEG recordings and transcranial magnetic stimulation in humans, and large-scale computer models of sleep and wakefulness. This research has led to a comprehensive hypothesis on the function of sleep, the synaptic homeostasis hypothesis. According to the hypothesis, wakefulness leads to a net increase in synaptic strength, and sleep is necessary to reestablish synaptic homeostasis. The hypothesis has implications for understanding the effects of sleep deprivation and for developing novel diagnostic and therapeutic approaches to sleep disorders and neuropsychiatric disorders.

Another focus of Dr. Tononi’s work is the integrated information theory of consciousness: a scientific theory of what consciousness is, how it can be measured, how it is realized in the brain and, of course, why it fades when we fall into dreamless sleep and returns when we dream. The theory is being tested with neuroimaging, transcranial magnetic stimulation, and computer models. In 2005, Dr. Tononi received the NIH Director’s Pioneer Award for his work on sleep mechanism and function, and in 2008 he was made the David P. White Chair in Sleep Medicine and is a Distinguished Chair in Consciousness Science.           (Sources: http://tononi.psychiatry.wisc.edu/people/cirelli.html; Wikipeia, PubMed etc.)

Some selected papers on sleep by Tononi and Cirelli

On behalf of Forum for Consciousness Rearearch